Teething and Bad Sleep: Is There a Correlation? 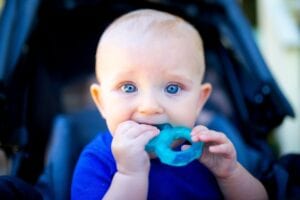 Teething and Bad Sleep: Is There a Correlation?

Have you ever been a scapegoat in your life?

I have, when I was younger and surrounded by older cousins who wanted to win easily!

What’s this got to do with teething, you might wonder?

I find that teething is the main scape goat when it comes to bad sleep, and not only. When I speak with families of babies who don’t sleep well, I hear teething being blamed a lot, both for bad night’s sleep and for why it’s not an ideal moment to address the child’s sleep difficulties.

So, let me throw some light on this dilemma.

First of all, teething gets blamed for just about every imaginable thing when it comes to babies. Baby’s got a fever? Probably because she’s teething. Baby’s crying more than normal? I bet it’s sore gums from those teeth coming in. Baby’s got runny poo for a couple of days? I’ve heard that diarrhoea can be caused by teething.

Now, it’s true all of those things are potentially the result of a tooth coming in. But most parents are too quick to blame teething for any and all deviations from the norm as soon as they notice that first tooth appearing. And this is especially true when it comes to sleep.

As parents, we are inclined to preventing discomfort in our babies, and that’s a good thing, of course. But the natural reaction when baby starts crying in the night is to go in and do whatever we can to soothe them, which can lead to baby being unable to get to sleep without that comfort.

So let’s imagine that you have been sleep training (though I find the expression “sleep intervention” much nicer and respectful to the baby than “sleep training”) for a couple of weeks, everything is going well, and then suddenly, you start to see a regression. Your baby is suddenly waking up crying two or three times a night. Naturally, you are going to look for a reason why they are slipping back into old habits. And if there happens to be a tooth coming in, that provides a quick and easy answer.

And, of course, it’s not fair to leave your baby to cry if they are actually in pain and not just looking for Mummy or Daddy to come help them go back to sleep, so you give in and decide you will get back to sleep training once this whole teething thing is over with.

Fast forward a year later, and that same baby is still getting soothed to sleep every time they wake up, because… I think there’s a tooth coming in!

So… just a couple of things to bear in mind before you give up on your sleep training routine due to incoming choppers.

First of all, teething symptoms last for around eight days, so if you are having two weeks of baby crying through the night, it’s either due to some other cause, or baby might have learned that crying when he wakes up will bring his favourite person into the room, and she will be helping him get back to sleep.

Second, teething symptoms are not nearly as uncomfortable as parents typically imagine they are. We hear about teeth “breaking” or “erupting” through the gums, which conjures up some cringe-worthy images, but nature is not nearly so heartless in this instance. Baby’s gums move out of the way to allow for incoming teeth.

Long story short, according to the experts, teething doesn’t cause a significant amount of pain.

And, just to be clear, I’m not suggesting that you should ignore the teething phenomenon altogether. I’m just suggesting bearing in mind that new teeth are not the villain they are often made out to be. And remember, your baby is going to be a lot happier while going through the process if he is getting full nights of uninterrupted sleep.

The same thing goes for his parents.

And, if you still don’t believe me, maybe this testimonial left from one of the families I worked with will be more convincing:

“We worked with Eliana when our son was 7 months old. As part of the consultation, Eliana told us that teething would not be affecting the results of our work together. We were initially sceptical and decided to get started in a moment where our son wasn’t teething as the first two teeth that had come through had caused us a couple of weeks of sleepless nights. Three weeks after having worked with Eliana, while our son was smiling, we noticed that two new teeth had broken through his gum without us having even realised. Our son had been able to sleep peacefully at night and during the day despite the teething… We had to see it with our own eyes to believe it!”

Why Should I Hire a Sleep Consultant?
November 6, 2018

The Five Steps to Getting Your Baby to Sleep Through the Night!

Download your FREE copy of my "Getting Started" Guide

You have Successfully Subscribed!

The Five Steps to Getting Your Baby to Sleep Through the Night!

Download your FREE copy of my "Getting Started" Guide

You have Successfully Subscribed!